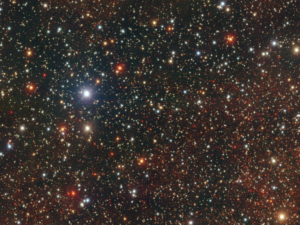 Like most spiral galaxies, the Milky Way has a roughly spherical collection of stars at its center called the bulge. How the bulge formed has been a long-standing mystery, with many studies suggesting that it built up over time through multiple bursts of star formation.

New research finds that the majority of stars in our galaxy’s central bulge formed in a single burst of star formation more than 10 billion years ago. To reach this conclusion, astronomers surveyed millions of stars across 200 square degrees of sky—an area equivalent to 1,000 full Moons. The resulting wealth of data is expected to fuel many more scientific inquiries.

They used the Dark Energy Camera (DECam) on the Victor M. Blanco 4-meter Telescope at the Cerro Tololo Inter-American Observatory in Chile, a Program of NSF’s NOIRLab. This wide-field camera is capable of capturing 3 square degrees of sky in a single exposure.

The team collected more than 450,000 individual photographs that allowed them to accurately determine chemical compositions for millions of stars. A subsample of 70,000 stars were analyzed for this study.

The wealth of data collected by this survey will fuel additional scientific inquiries. For example, the researchers are looking into the possibility of measuring stellar distances to make a more accurate 3D map of the bulge. They also plan to seek correlations between their metallicity measurements and stellar orbits. That investigation could locate “flocks” of stars with similar orbits, which could be the remains of disrupted dwarf galaxies, or identify signs of accretion like stars orbiting opposite the galaxy’s rotation.