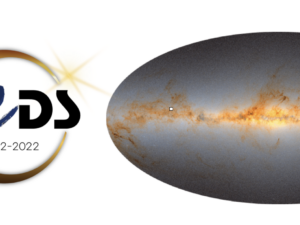 A dark matter-like effect in globular clusters, Gaia finds out 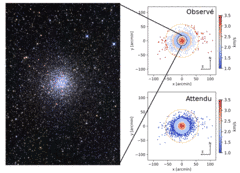 The large field-of-view Gaia observations of NGC 3201 allow us to measure the velocity dispersion in the outskirts of the cluster, which appears significantly higher (red dots in top right panel) than what expected from standard Newtonian dynamics (bottom right panel). This peculiarity suggests the presence of dark matter, left over of the formation in the early universe, or unexpectedly strong tidal heating due to the Milky Way potential.

Globular clusters are dense spheroidal collections of ~a million very old stars that orbit around a host galaxy, and are actually amongst the stellar systems that have been studied for the longest time, dating back to the 17th century. However, their formation presently remains one of the most poorly understood phenomenon of modern astrophysics. Their apparent simplicity has made them the textbook example of simple old stellar population systems, characterized by simple Newtonian dynamics with all their mass provided solely by their stars. It has nevertheless also long be suspected that such objects could have been born inside very light dark matter halos, but a dark matter effect had never been observed directly in the dynamics of globular clusters until today.

Now, by carefully analyzing the Gaia proper motions of stars in the outskirts of the globular cluster NGC 3201, located at 16 thousand light-years from the Sun, a team of astronomers from the Observatoire astronomique de Strasbourg might have detected the gravitational effect of dark matter in a globular cluster for the very first time. They found that the movements of stars (i.e. the dispersion of the velocities of stars) is much higher than what a priori expected in the outskirts, even in the presence of the disturbing effect due to the gravitational potential of the Milky Way producing a tidal heating. The measurement could thus indicate that the tidal heating for NGC 3201 has been unexpectedly strong for some unknown reason, or that dark matter is indeed present in the cluster.

Dark matter would indeed start affecting the dynamics of stars in these outer regions, whilst remaining subdominant in the inner regions where the density of stars is extremely high compared to the outskirts. Could such an effect also be a potential signature of a break of the classical Newtonian law of gravity? The authors noted that the measured effect would be a bit too strong to be explained by popular alternative gravity models such as modified Newtonian dynamics, but that more simulations would be needed to conclude. In all cases, this measurement is paving the way for a revolution in our understanding of the dynamics, history and formation of globular clusters. Is there something truly peculiar and abnormal with the cluster NGC 3201, or is it a representative case? To find out, the authors now plan to extend their study to a larger sample of clusters, still using the exquisite data from the Gaia mission.

Article: Exploring the Outskirts of Globular Clusters: The Peculiar Kinematics of NGC 3201 (The Astrophysical Journal Letters), also available on arXiv.